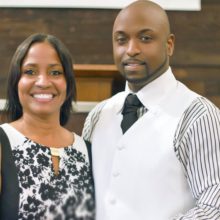 Steven Lillard is a man after Gods own heart who serves in the Apostolic and Prophetic ministry with a heart to Shepherd the flock of God to become better Sons and Daughters for our Lord and savior Jesus Christ. He is recognized as a Prophet with a potent Apostolic/prophetic anointing. He served in the Apostolic/Prophetic Ministry in several thriving ministries in the tri-state area. In 2004 he was a part of The Call to Evangelistic Business Training in the Market Place Leadership and Development seminars. There he was taught how to be an effective minister in the Marketplace. He served in Solid Rock Church’s Prison and Outreach Ministry-Ministering as a recognized Evangelist in Healing and Deliverance. He began his training in ministry OBIC/The Lords gym where he was mentored as a disciple on how to teach young men and woman of God on witnessing to the lost, Living the Word in its fullness and affecting the community by example.

He later furthered his training at the EMI Training Center where he received his certifications in the Foundations of Inner Healing and Deliverance. He attended Cincinnati Bible way Eagle Bible Institute/Bible College where he was taught sound doctrine in biblical application of the scriptures. In 2007 he attended the Cincinnati Bible Way\Tri Stone New Beginning training on the 5 fold ministry where he was trained in The Office of an Apostle, Prophet, Evangelist, Pastor and Teacher, with a Certificate and training in the office of the Apostle/Prophet.

In 2011 He was ordained as a Prophet at Forever Praise Ministries Inc, where he served as a Prophet and Minister of the Gospel of Jesus Christ. He directed the Men of Honors Men’s ministry as well as A Better Way Men’s Group for the St Vincent DePaul Outreach Program.

Prophet Lillard has received his training and activation from various Ministries and facilities across the city like New Life Temple Bible College/Leadership School. He is a part of the Christian International Prophetic teams were he ministers to hundreds of people yearly that come to receive Inspiration, Direction, Encouragement, and Healing. He was trained under founder of the Christian International Ministries Bishop Bill Hamon and Director Apostle Leon Walters with certifications in MSG and Prophetic Ministry at their Ministering Equipping School in Versailles Indiana.

Deborah was born and raised in the City of Cincinnati Ohio; she pursued her calling to preach and teach the word of God from a young age to a saved and unsaved generation: And after many life’s challenges Deborah was able to overcome by the power of God.

She continued her education and training under the Christian International ministry equipping school Founded by Bishop Bill Hamon and overseen by Apostle Leon Walters with certifications in MSG and Prophetic Ministry.

She continued her education receiving certifications in Foundations of Inner Healing and deliverance under the EMI training facility in Cincinnati Ohio.

She studied under the leadership of Pastor Godfrey Sr. at the New life Temple Bible College and leadership school.

In 2010 Deborah was Ordained Lead Pastor and Administrator of FLAME OF FIRE Ministries INC overseen by Senior Pastor Herbert Penny. She impacted many through her teaching of the word of God in Sunday school and Bible studies. She ministered to many women that were hurting in broken relationships, which needed deliverance from oppression and liberation in their spirits. Though her own trials and tribulations she was able to effectively minister to root issues dealing with the whole woman.

After doing individual counseling with woman over the years, to reach more people, Prophetess Deborah began to receive training and teaching on the ministry of emotional healing to the Spirit, the Soul, and body.  She began to apply this ministry intensively to the lives of others to bring healing and deliverance to the body of Christ.

In March 2014 she was ordained as Co Pastor of Judah Sanctuary of Praise Middletown Ohio Under Apostle Keith J Brooks and later Co labored as Prophetess and Pastor of Kingdom Ambassadors in Christ International.

Preaching and Ministering to Gods people is her passion!  She has ministered in various venues across the city. Prophetess Deborah Lillard Is an anointed vessel chosen by God to win the lost and to point the people of God back to Jesus Christ.