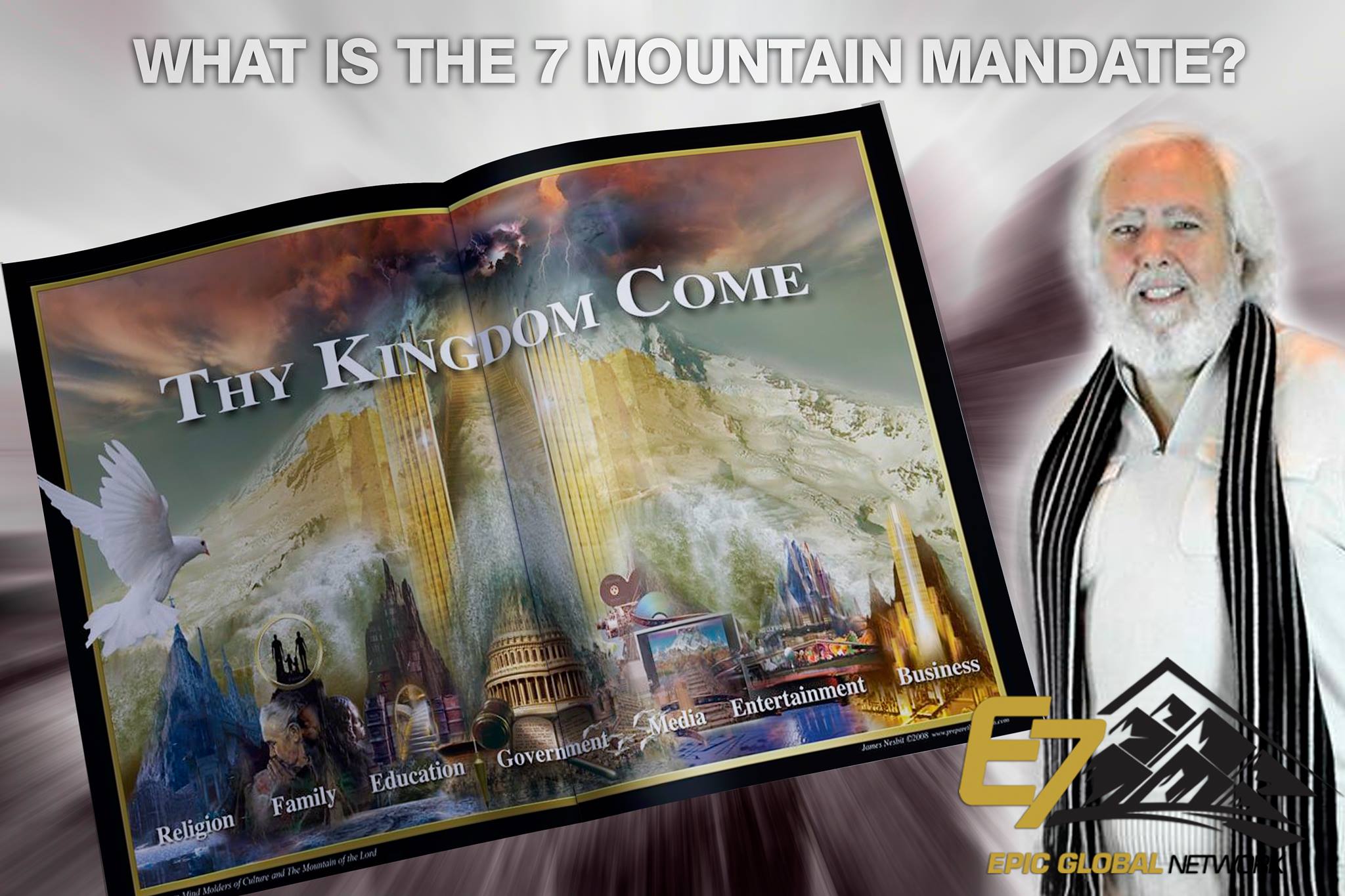 WHAT IS THE 7 MOUNTAIN MANDATE?

Many people upon hearing this term for the first time are asking the question: What is the 7 Mountain mandate? Scripture is replete with references concerning mountains in both the New and Old Testaments. Certain mountains were places of encounter where God met with those he had chosen, such as Moses and Mt. Sinai and Jesus and the Mt. of Transfiguration.

Mountains were also places of confrontation between light and darkness, such as place where the Prophet Elijah confronts backslidden Israel and challenges to a contest the 450 false prophets of Baal and 400 false prophets of Asherah on Mt. Carmel. Mt. Zion, a high point in Jerusalem was where King David ruled from after taking the stronghold from the Jebusites and establishing his palace and the Tabernacle of David there.

The heavenly divine cosmic mountain called Mt. Zion is the spiritual counterpart of it – it is the place where God dwells and from where He rules and reigns, and is now the place where believers dwell with Him.

So the biblical theology of mountains is incredibly important for us to understand God’s greater Kingdom plan and purpose. It becomes a hermeneutical lens that helps us see more clearly in Scripture the spiritual dynamics taking place in the invisible realm, but also helping frame a biblical worldview for us that inspires and motivates us to more passionately pursue our destiny and calling in Christ.

The 7 Mountain mandate has it modern day inception with two great apostolic giants of the faith who have pioneered some of the largest youth movements in the world: Loren Cunningham, founder of Youth with a Mission (YWAM), and Bill Bright, founder of Campus Crusade for Christ. In August of 1975 these two leaders had lunch and were comparing notes of what God was speaking to them. Surprisingly, they both on the same day received the same revelation from the Lord concerning the 7 spheres of influence that are the mind-molders of society, culture and nations. They began to share it with their movements, but it did not gain much global traction in that season.

A few years ago, some current apostolic leaders from the New Apostolic Reformation movement (about 20+ years old now) picked up that revelation and began to develop it more in the framework of using the term “mountains” rather than just “spheres.” The message began to gain traction and is becoming an apostolic mandate for our generation.

Isaiah 2: 1-5 (Micah 4:1-7) speaks of the mountain of the Lord’s temple (palace, house, court, etc) being established as chief or highest among the mountains – or you could say “ruler of the mountains,” and as this happens – or is manifest, all nations/all peoples will flow or “stream” up to it. It’s interesting that in Jeremiah 51:44 God is pronouncing judgment on Bel – the dark fallen prince who ruled in Babylon, and God says He will make Bel spew out what he has swallowed, and that the nations will no longer “stream” to Bel because the wall of Babylon had fallen.

The Hebrew for “stream” is “nahar” and is the same as in Isaiah 2:2. So we see a reversal taking place – whereas the nations had streamed to satanic fallen princes and were swallowed up so to speak by them, they now will stream to the Mountain of the Lord as the rulership of overcoming believers who understand they are “kings” is exercised on the tops of the (7) mountains.

Do you see it? Do you see the picture here? Jesus is building His church – His ekklesia at the very gates of hell and they cannot prevail. He has given us the key of the Kingdom to bind and loose – to transact Kingdom business in the earth. And God is raising a company of sons and daughters – Daniel, Joseph, and Esther “overcomers” who will rule and reign with Christ as “kings and priests” on the tops of the mountains so that the nations will flow up to the house of the Lord.

Obadiah verse 21 speaks of “deliverers” going up on Mt. Zion to govern the mountains of Esau, and that the kingdom of Esau will be the Lord’s. God is calling His sons and daughters to begin to take their rightful place with Christ and learn how to rule and reign on the mountains. So the 7 Mountain mandate becomes an incredible template for spiritual warfare. It was the missing piece to really begin to see greater healing, restoration and transformation of cities and nations.

This is why the 7 Mountain message and mandate is such an important part of the vision of EPIC Global Network (E7). And this is why EPIC stands for Extraordinary People Influencing Culture. We are EPIC!! You are EPIC – an extraordinary person called to influence culture – to be salt and light influencers – a city set upon a hill whose light cannot be hidden. You are called to be Daniels in Babylon – Josephs in Egypt and Esthers in Persia. You are IN Babylon – but not OF Babylon. And Bel will and is giving up the harvest because God has judged him.

And we are the authorized Holy Spirit energized and empowered judicial witnesses, called upon to carry out the sentence on the mountain tops through our gifts, talents, abilities, calling and destiny. Are you up to the task? To the calling? May we learn more and more to “reign in this life as kings” and realize that we are the vice-regents of the King of Kings and Lord of Lords – Jesus Christ, who is now ruling and reigning on the eternal throne of David in heaven at the right hand of the Majesty on High.